One lone snow goose who missed the migratory memo last spring was waddling around the cage amidst a mallard and a wood duck. The ducks perched in one corner and dabbled on some corn, avoiding the hissing goose. Morgan approached the large box cage and, after scooping out the ducks and securing them in a burlap sack, simply lifted up the cage and let the goose fly away to its other five remaining goose friends. 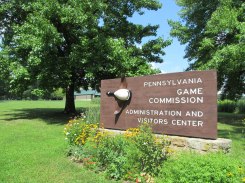 An automatic feeder spreads out corn once a day to make sure it’s still visible to the ducks. PC: Jillian Clemente

Morgan hasn’t seen this before. Since he’s now the southeast supervisor, he’s mostly doing paperwork for the 12 counties he manages. Typically, it’s Lauren Fenstermacher, Middle Creek wildlife conservation education specialist, who banded the following day. She hasn’t seen any geese while banding for ducks in her past year, either, but in the 30 years Middle Creek has been banding, one or two have probably showed up in the past. 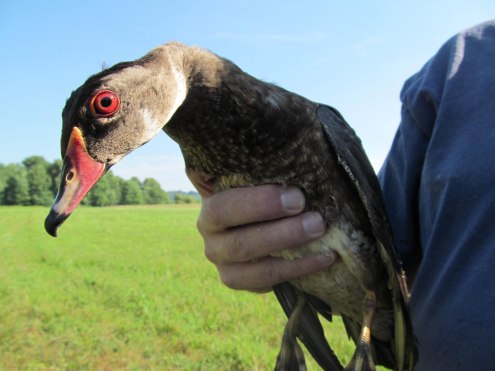 A male wood duck isn’t quite in its breeding plumage yet. Its red eye gives its sex away. PC: Jillian Clemente

Fenstermacher securely holds the female wood duck before getting the band on the pliers. PC: Jillian Clemente

John and Lauren both agreed to let my dad and I tag along and spend a day in the life. For me, it was both shadowing experience and a heck of a lot of fun; for Dad, strictly the latter.

Even on the first day, Aug. 9, the day I filled up my hip waders with “fowl” water on the very first trap, I finished the morning with a smile on my face, albeit slightly sweaty and muddy.

Banding is a fairly simple process. After the scientist, muddy teenager and her father return from the trap with ducks in hand, the tackle box comes out. It’s filled with different sizes of bands; each bird gets its own special size that conforms perfectly to its leg. There are one special pair of pliers per size of band. The ends must be flush. If there’s a gap, fishing line could get caught. If it overlaps, it could rub the duck’s leg and cause an irritation. 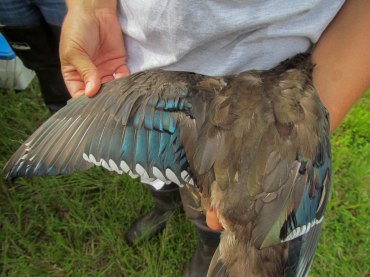 A female wood duck’s wing is differentiated from the male based on the white line running across the bottom. The white is “scalloped” here, not solid like a male’s. Sometimes, duck experts only have a wing to tell by, so it’s vital to understand the differences for the different ducks. PC: Jillian Clemente

A tackle box holds all the necessary supplies for duck banding today. It wasn’t too difficult to “fish” the pliers or bands out. Photo and pun credit: Jillian Clemente

Duckily, the birds were cooperative. After being banded, the sex, type and age were recorded, and I released them back into the pond. The only dangers to the pond were crocs, but just the ones on my feet.

Bad jokes aside, ducks are my favorite bird, so I’m thrilled that I had the chance to hold a few and see actual research being done. To say it sparked an interest in doing further research with this bird may or may not be a true statement, but we’ll see where my path ends up. Maybe it’ll lead me to a pond.

Fenstermacher walked back to the truck after checking a final trap. PC: Jillian Clemente

I also got the chance to report on this experience for the Reading Eagle’s Outdoor section. Read the article here on Sept. 18.