Broken water heaters flood basements, something I have now experienced firsthand. My family doesn’t like flooded homes. I don’t think anyone does, but some birds do.

This Carolina wren was recorded but not banded after it was taken out of the mist net.

Dr. Chris Rota, an assistant professor of Wildlife & Fisheries Resources at WVU, studied wetland sparrows’ winter habitat use in the fall and winter times of 2016. It’s one piece in the greater research scheme to evaluate the function of Natural Resources Conservation Service wetlands and winter habitat use, an interdisciplinary project through WVU’s Davis College.

Adam Rossi, who is wearing crocs aka the best shoe ever, assists Dr. Rota with mist net setup. 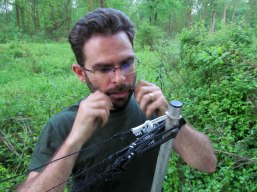 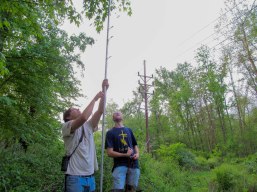 Dr. Lituma and Jimmy Hartley are finalizing the set up of the final mist net. 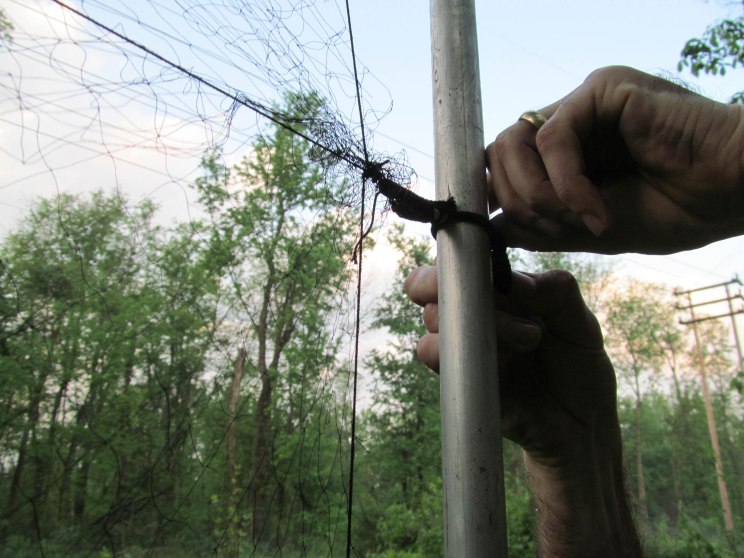 Dr. Rota ties up a few loose ends to set up one of the mist nets.

He used mist netting practices to study the birds. After setting up three nets, all were checked every half hour for any bird. All were recorded, but only those in the swamp-type sparrow family were banded.

This side project is more focused on WVU’s arboretum and evaluating survival of the swamp-type sparrows in local wetlands. He said, “We started in the wintertime and continued into the springtime because it’s so close to campus and it’s a great way to get undergrads involved in some bird banding.”

Cue the undergrads! And, well, a graduate student. 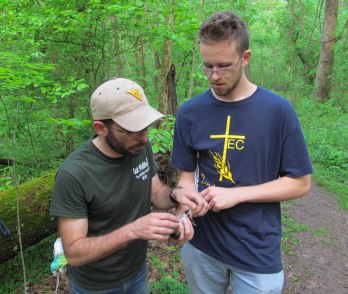 Dr. Lituma instructs Adam Rossi where and how to record data about the birds.

Adam Rossi is a now-graduated master of Recreation, Parks, and Tourism Recourses, and Jimmy Hartley is a now-senior studying Wildlife and Fisheries Resources. They both accompanied me to my first mist netting experience (well, Jimmy technically looked at trees that day, but he was in the same stretch of forest).

Also joining us was Dr. Chris Lituma, who saw the black-backed oriole on my street recently. I guess people named Chris like birds or something like that.

Dr. Rota only banded the swamp-nesting sparrows because that’s the focus of his study. The American Robin was recorded but let go.

Dr. Rota plans on banding year-round, but in the fall and winter months he plans to band more heavily in NRCS wetlands.

Sometimes, it’s best to do things by the book, and one of those things is aging birds.

Adam Rossi records the American robin as caught; it will not be banded. 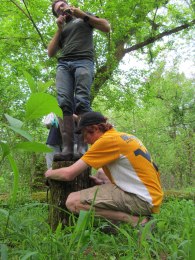